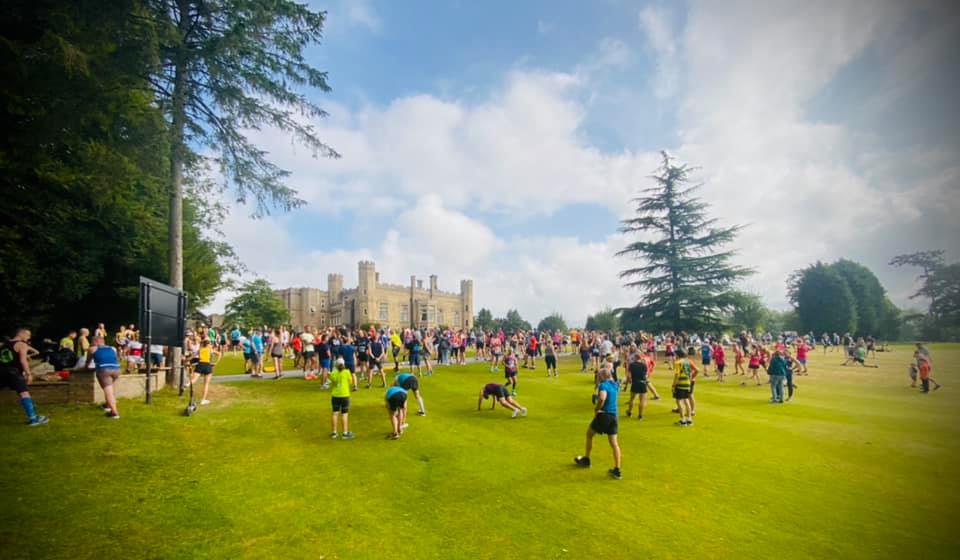 To the sound of Sweet Caroline, more than 400 runners left the delightful grounds of Cave Castle and the first South Cave 10K was underway – more than two years after the idea was first mentioned by David Rivers to a small group of Kingston Upon Hull Athletic Club (KUHAC) members. The 2020 attempt was killed by the pandemic but by spring of this year things were looking more promising and the idea began to take shape.

Summing all this up isn’t easy as you probably don’t want to know about the boring stuff involving getting the course measured and certificated, clearing the event with health authorities, police and parish councils and getting the word out to all the businesses and residents on the route. But, to the surprise of many of us who had run dozens of other people’s 10Ks, it turns out that all this is really important. So although we can’t thank everyone involved, we should start with a round of applause for David who took care of a lot of this behind the scenes detail.

And as you have been patient so far, here’s the first exciting bit, the race was run in quite majestic fashion by City of Hull’s Matthew Nelson in 32.19 – yes that time that you would be happy to get at Parkrun most Saturdays for doing 5K. On the female side, East Hull Harriers provided the first woman home in Venika Moverley who finished in a remarkable 38.48 then had to rush off, because she had a dance exam booked! 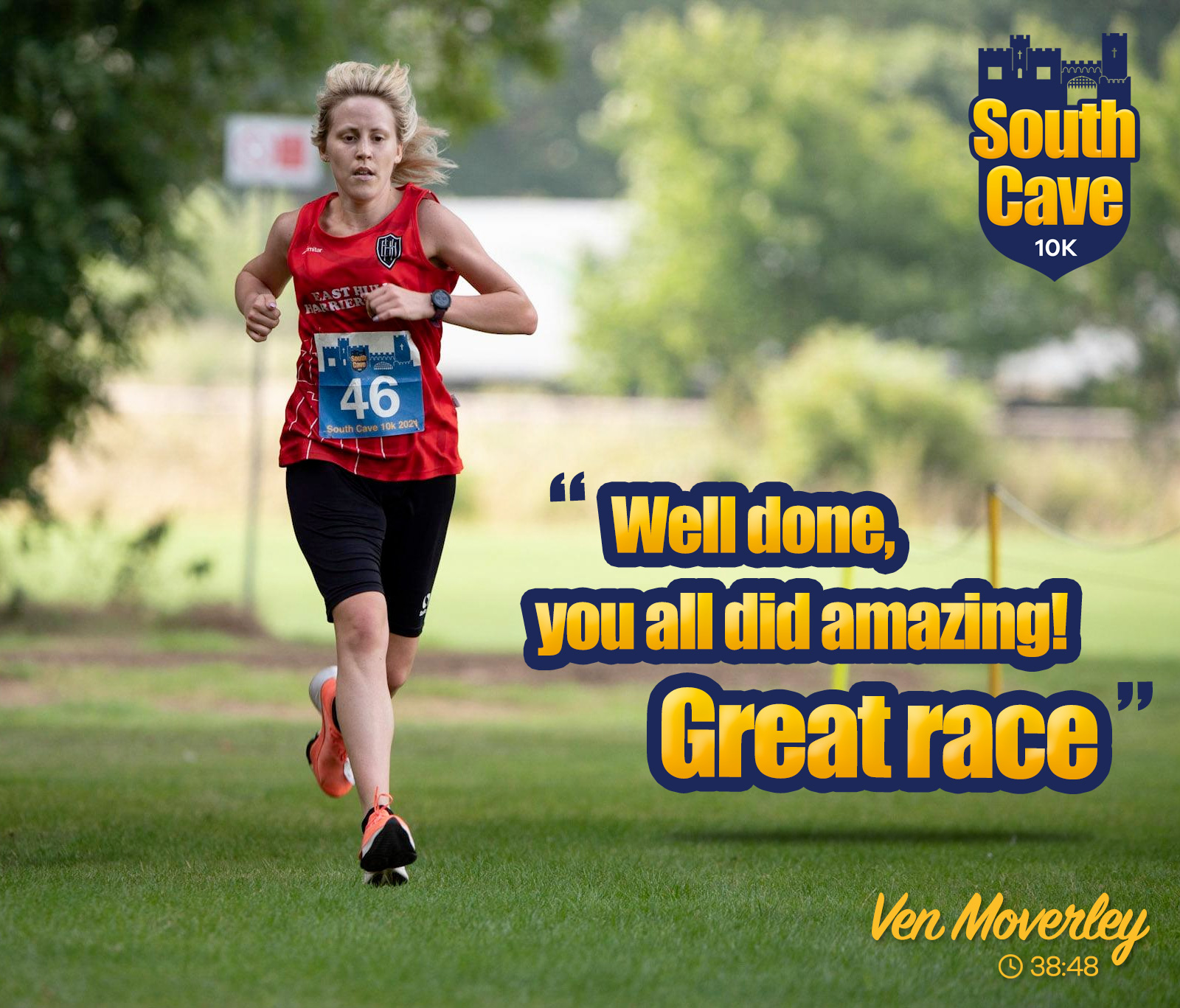 Now to a few thank yous for people who were a huge help both before and on the day. People like Alan Whitehead from South Cave school who came out early on the Sunday morning to unlock the gates on part of the course; to Kate Hogarth and Emma Dearnley at Cave Castle; to Matt Simpson, Lee Murphy and their committee for letting us use the Pavilion, our superb race HQ (and a couple of them even ran the race; nest year maybe Lee?); to James Starkey who provided the warmup session and music at the Castle before the race; and to the HEY Smile Foundation who lent us some of the equipment we needed via their Vault. And of course to the two parish councils who not only gave us the go-ahead for the event but lent us Lyn Turner and Claire Wood – their chairwomen – to help with the prizegiving.

We’re also very grateful to local farmer Rob Nicholls for permission to use that little off-road stretch before entering Ellerker. It isn’t a public footpath but he was kind enough to give the go-ahead so that the runners got that very rural entry into the pretty village of Ellerker. Thanks Rob, fingers crossed you will welcome us back next year!

One thing that rapidly became obvious as the weeks before the big event ticked by was that KUHAC members had a remarkable range of skills, and contacts, and that we were going to need every one of them. Alex Wilson and Rosie Crane persuaded their employers – Morrisons and Co-op respectively – to provide water for the drink station and for the finishers as well fruit and other useful stuff. Andy Dickerson found most of the sponsors we needed from his contacts in local businesses and then applied his organisational skills to a plan for who would do what on the day that made D Day look like a picnic.

We said from the start that this would be a professional event and that we needed to look the part. Enter Paul Scott who made sure that the event website, every piece of publicity and material including the flags and markers on the course would be “on brand”. We also wanted a proper record of the day so our two star photographers – Steve Sole and Andy Lewis – were out on the course capturing the highlights.

Which included a truly heart-warming moment when the final runner approached the finish to a standing ovation from spectators and runners. And she beat her target time, so well done Amanda Barr. It was also lovely that she took time later to thank our tail-runner Bibhash Dash with his 5-year old son Arjun who followed Amanda on his blue and yellow bike (which may or may not have been specially ordered by Paul Scott). 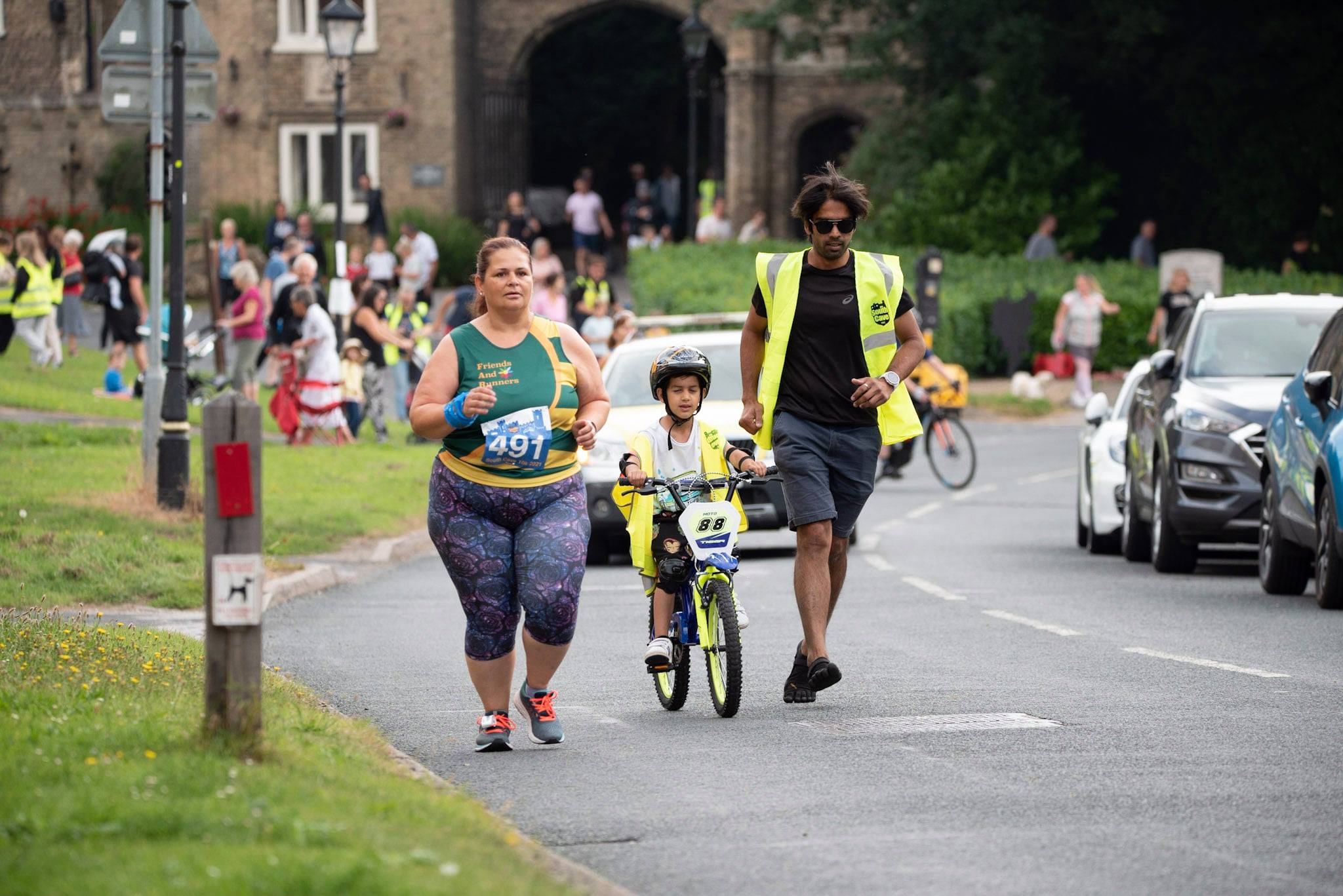 That’s a few of the KUHAC gang mentioned but most of the club was there – helping to park cars, registering the runners, manning the drinks station and of course doing that most thankless of tasks, standing on the route and hoping that car-drivers have seen the road closed warnings! That so many people mentioned their friendliness and enthusiasm and thanked them for their warm encouragement tells you all you need to know about the unsung heroes of the day. So I hope they will forgive me if I don’t name them all – every single one of you contributed to an event that made the whole club proud.

And that’s not to forget the locals who also offered us help, including Barry Watson – whose entire family was otherwise occupied running the race – and Dave and Hannah Sedman. Speaking of families, one particular group was at the heart of what made this a community event as well as a great addition to the local road running calendar.

In memory of Bob Reay

The decision was taken very early in the event planning to mark the sad death a couple of years ago of a well-known South Cave runner, Bob Reay. He had been a regular at runs in the area for 30 years as well as being well-known in the village for helping with everything from litter picking to raising the money to build the Pavilion. On the day, his son Philip ran the 10K, his daughter Sarah and grandson William were marshals and his wife Pat presented the Bob Reay Memorial Shield. A wonderful day for the Reay family, for South Cave and Ellerker and, of course, for Kingston.